5 Lesser-Known but Not Lesser than…

Dung beetles use the Milky Way as a compass. Hyenas are more closely related to cats than dogs. Crocodiles, meanwhile, are older than dinosaurs – having been around for over 200 million years. The collective noun for a group of zebra is a “dazzle”.  Don’t you just love that?

These are the kinds of amazing facts you can learn about African animals when you aren’t solely focused on seeing the Big 5.

Of course, lion, leopard, elephant, rhino and buffalo are the holy grail of wildlife viewing… And for good reason: they are more spectacular in real life than you can ever imagine. But there is so much more magic to be found in the African wild if you keep your eyes peeled for animals lesser-known, but definitely not lesser-than!

Here are 5 of our favourites: 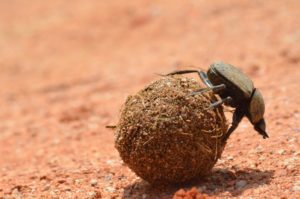 Aside from the obvious, perhaps-childish-but-oh-so-fun, amusement to be had in sending your friends back home text messages laden with poop emojis, this little beetle has much to delight and astonish. 1. They spend their lives rolling great balls of feces that can exceed their own body weight by up to 10 times. 2. They roll said balls in a straight line, always a straight line, no matter what obstacles may stand in their way. 3. Scientists have discovered that dung beetles ​use the stars to navigate and are capable of doing so even when only the glow from the Milky Way is visible. They really do need to come up with a superhero poop emoji for this little guy.

The honey badger… also affectionately known as the Chuck Norris of the animal kingdom, courtesy of their reputation for being completely fearless. Honey badgers actually try to avoid trouble, but thanks to poor eyesight and a life spent with their noses in the ground, trouble often finds them. When surprised by predators, they go on the attack, readily taking on larger foes. And with their incredibly powerful jaws, capable of breaking a tortoise shell, and a loose, tough skin that is largely impervious to injury and which allows them to twist and turn in the grasp of a predator, they frequently win. They are also intelligent and have demonstrated the ability to use rudimentary tools such as sticks, mud, and stones when attempting to escape a wildlife rehabilitation centre… Chuck Norris meets MacGyver.

Also known as bush babies, or nagapies (translation: night apes), galagos are tiny primates – usually around 5 inches (13 cm) – with large eyes that grant them good night vision. Aside from their enormous eyes, bush babies are especially well known for their amazing jumping abilities – they can jump up to 6.6 feet (2 m) in the air thanks to elastic energy stored in the tendons of their lower legs. Bush babies also likely contributed to a myth that is used to frighten small children: their baby-like cry is believed to have helped spawn stories of a powerful animal that kidnaps humans. Tiny animal + big eyes + big jump + big myth = big magic. 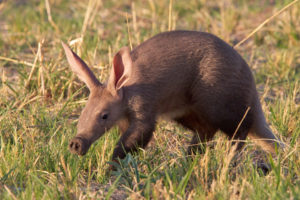 Question: What looks a bit like a pig, has rabbit-like ears, and a kangaroo’s tail? Answer: the aardvark. But wait, there’s an even bigger twist: not one of these is related to the aardvark – in fact, one of his closest living relatives is actually the elephant! Often thought of as being the same as anteaters, aardvarks – which translates as ‘earth pigs’ – are a separate species to anteaters, though they do, indeed, eat ants – up to 50 000 in a night! Aside from being an ‘earth pig’, the aardvark is also a bit of an earth activist: old abandoned aardvark burrows are good for the ecosystem as they are often inhabited by smaller animals like the African wild dog. 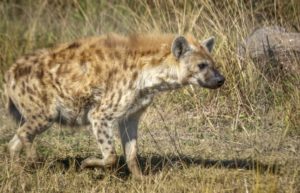 There are so many cool things to say about hyenas, so many myths to debunk, where to begin? Let’s start with the fact that hyenas are actually more closely related to cats than dogs, in spite of their looks. Then there’s the fact that, in spite of having a bad reputation for being purely scavengers, living off the scraps of lion- and leopard-kills, spotted hyenas (the most commonly known kind of the species) kill up to 95% of their own food – more than any other predator in the bush. And then there’s their laugh… that eerie, scary, straight out of your nightmares cackle… It may sound like a taunt, but this is actually the sound the hyena makes when feeling nervous or excited, or when submitting to another hyena. In addition, hyenas have 10 other vocalizations used to communicate with the rest of the clan – sounds which can be heard up to 5 km away! Are these the secret kings of the bush? Could very well be!