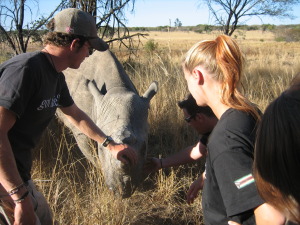 Can you imagine a world where rhinos don’t exist? Just think about it—endless stretches of African forests and grasslands with no trace of these magnificent, mega-herbivores, wiped off the face of the earth, never to return. Sounds pretty grim, we know, but that is exactly what is happening to the black rhino.

Believe it or not, nearly 1 million black rhinos roamed the earth in the early 20th century. But now, the black rhinoceros is critically endangered. Rampant poaching has caused their numbers to decline rapidly. And as a result, fewer than 5000 black rhinos exist today (and their population continues to be in a freefall). If extreme measures aren’t taken to curb rhino poaching, it won’t be long until we experience another tragic loss of one of our most beloved species.

We could prattle on and on about the atrocities rhinos face at the hands of poachers, the needless loss of life, and the questionable future of these remarkable animals. This, however, is not a story of doom and gloom, but rather one of optimism and inspiration—one that might offer a glimmer of hope for the black rhinoceros. 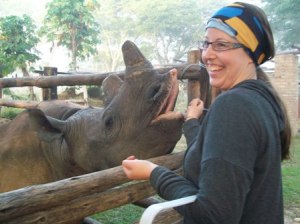 What if we were to tell you that there are people willing to spend every waking hour dedicated to protecting wildlife and the endangered rhino? Or how about people who have so much integrity and infectious enthusiasm that they have inspired many others to this very cause? And is it possible there are people who are celebrated the world over for their determination and hard work? Fortunately, for us and the black rhino, there are!

Zimbabwe’s black rhino population is exceedingly reliant on conservation programs. It is a place where endangered animals depend on the kindness of strangers to help protect them from illegal poaching. And it is here where you will find Imire—a wildlife sanctuary world-renowned for its black rhino breeding program.

Family founded and family operated, the Travers family take great pride in their contribution towards conservation. Thanks to their patience and perseverance, the team at Imire have managed to successfully release 11 rhinos into the wild. The Travers’ unwavering passion for wildlife and conservation continues to fuel their labours of love, doing everything in their power to ensure the survival of this incredible endangered species. 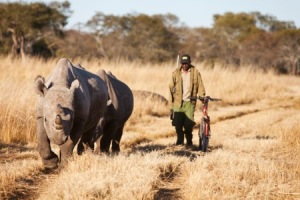 Because of their extraordinary involvement in conservation and their ground-breaking black rhino breeding program, our very own Director and Safari specialist, Daniella Ponter, was delighted to make a substantial cash contribution to the Imire Rhino Sanctuary on behalf of all of us at Sikeleli Travel & Expeditions The Travers and Ponter families have known one another for two generations now, and we are thrilled to be a part of Imire’s tireless efforts to help restore the black rhino population.

Upon receiving the donation, Judy Travers raved, “We would like to thank Sikeleli for so generously coming on board with Imire Rhino and Wildlife Conservation. Thank you for recognizing the role we all need to be part of and for sharing this huge responsibility. There is no way we could do it alone.”

Sikeleli Travel & Expeditions is honoured to be a contributing member of the Imire Rhino Sanctuary. We look forward to continue supporting their invaluable work, helping to give rhinos a fighting chance for generations to come.

How would you like to experience these amazing animals closer than you ever dreamed possible? If you are interested in an extraordinary opportunity to visit or volunteer at the Imire Rhino and Wildlife Conservation, contact Sikeleli Africa today!

Aaron Chan and Darryl our dear repeat guests from

It's World Lion Day and also Women's month so what

On a recent trip to Kenya – our senior travel ex